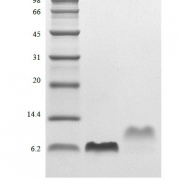 Epidermal Growth Factor (EGF) was originally discovered in crude preparations of nerve growth factor prepared from mouse submaxillary glands as an activity that induced early eyelid opening, incisor eruption, hair growth inhibition, and stunting of growth when injected into newborn mice. Human EGF was isolated from urine based on its inhibitory effect on gastric secretion and named urogastrone, accordingly. EGF is prototypic of a family of growth factors that are derived from membrane-anchored precursors. All members of this family are characterized by the presence of at least one EGF structural unit (defined by the presence of a conserved 6 cysteine motif that forms three disulfide bonds) in their extracellular domain. EGF is initially synthesized as a 130 kDa precursor transmembrane protein containing 9 EGF units. The mature soluble EGF sequence corresponds to the EGF unit located proximal to the transmembrane domain. The membrane EGF precursor is capable of binding to the EGF receptor and was reported to be biologically active. Mature human EGF shares 70 % a.a. sequence identity with mature mouse and rat EGF.

Fully biologically active when compared to standard. The ED50 as determined by a cell proliferation assay using murine Balb/c 3T3 cells is less than 1 ng/ml, corresponding to a specific activity of > 1.0 × 106 IU/mg.

Lyophilized from a 0.2 um filtered concentrated solution in PBS, pH 7.4.

Less than 1 EU/ug of rHuEGF as determined by LAL method.

We recommend that this vial be briefly centrifuged prior to opening to bring the contents to the bottom. Reconstitute in sterile distilled water or aqueous buffer containing 0.1 % BSA to a concentration of 0.1-1.0 mg/mL. Stock solutions should be apportioned into working aliquots and stored at ≤ -20 °C. Further dilutions should be made in appropriate buffered solutions. 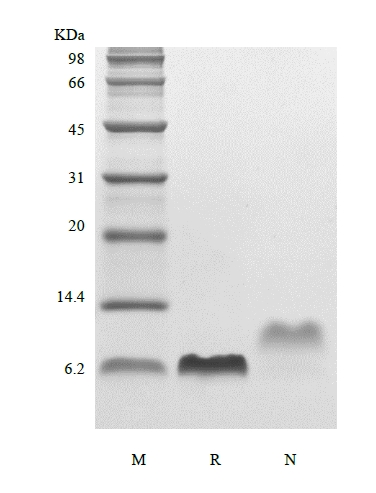